The Importance of Criminal Record Relief for Trafficking Survivors

Trafficking victims are often arrested, tried, and convicted for crimes they didn’t choose to commit. In fact, more than 90% of sex trafficking survivors reported being arrested for crimes related to their trafficking, such as prostitution, drugs, theft, or unlawfully having a weapon to defend themselves from the potential of violent sex buyers.

Traffickers intricately weave a web of manipulation and control around their victims to make it difficult to leave, so many victims have difficulty coming forward because they fear prosecution. If traffickers are successful in manipulating their victims, then their victims do not register their experience as trafficking, but rather view themselves as culpable to these crimes. Even if survivors are able to leave, it often takes years of support services to recognize the situation as trafficking. Further, victims rarely self-identify and are often not properly screened and identified when they are detained for criminal charges. 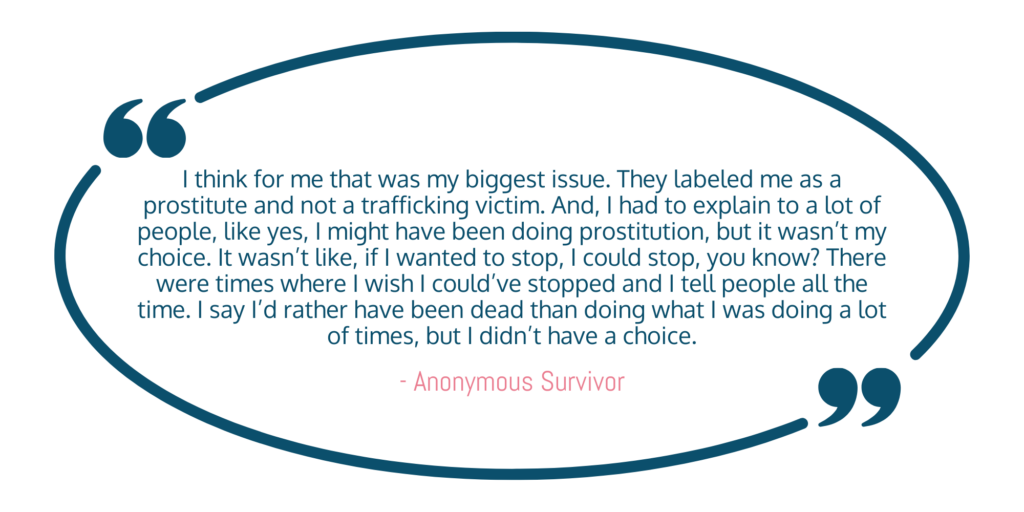 Because of this, clear situations of trafficking are often missed, and as a result, victims have been arrested repeatedly. While we continue to work towards creating a system that is better at identifying and responding to the issue, the dynamics of trafficking render it unlikely that we will ever be able to fully guarantee that an individual being arrested, prosecuted, convicted, or incarcerated, is not a trafficking victim.

However, criminal records not only effect a survivor’s ability to regain control of their lives and build a life once they’ve escaped a trafficking situation, but their ability access housing, employment, education, and financial resources as well. According to a 2016 National Survivor Network survey, 73% of respondents reported losing or not receiving employment, and 58% were unable to obtain safe and affordable housing. 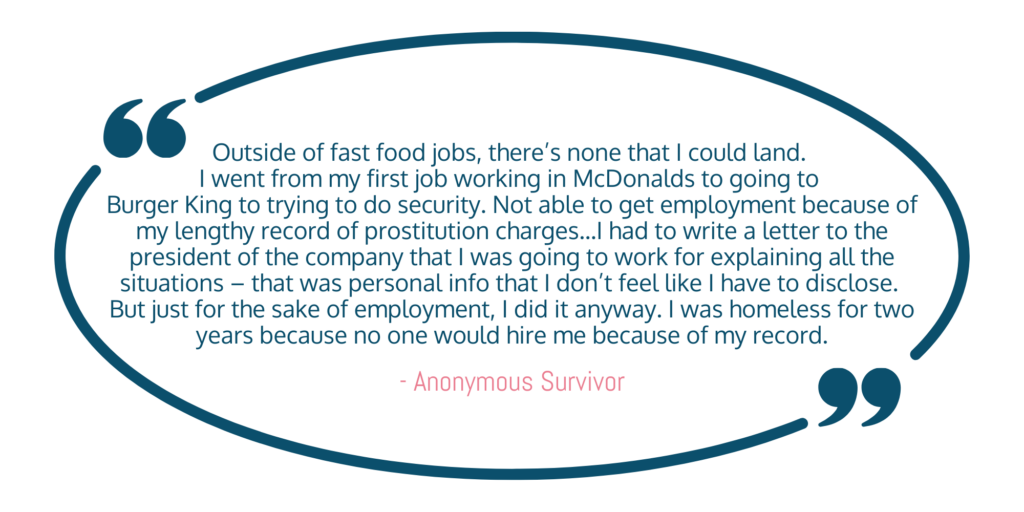 This makes it harder for victims to re-integrate into society and put their experience behind them as they are constantly reminded of the trauma they once endured.

In this way, traffickers use criminal records as a means of making those they control even more dependent on them.

For example, a survivor left her trafficker, only to have the trafficker immediately go to Family Court to seek custody of their daughter. The trafficker based his claim that she was an unfit parent on her convictions for prostitution-acts that he had coerced her into committing.

Traffickers work hard to shield themselves from criminal liability by placing it all onto the victim, who racks up charges until someone in the system recognizes that this is trafficking. At that point, we rely heavily on victims viewing the system as their ally in order to help us bring their perpetrator to justice. We should not expect this to happen when, at the end of it all, the survivor is still stuck with a criminal record that severely restricts one’s ability to legally provide for themselves.

Is there a way to break this cycle?

The answer is criminal record relief for survivors. Criminal record relief provides trafficking survivors with the opportunity to rebuild their lives by clearing their criminal records. This allows them to obtain employment as well as access to government assistance such as educational grants, housing, and more. In short, it allows survivors to get back on their feet and opens the doors to becoming fully functional members of society.

HTI Labs drafted a criminal record relief law for the state of Nebraska, which was enacted in 2018. It allows for victims to have criminal records expunged for crimes they were forced to commit while being trafficked. The law has been sited as the best of its kind in the United States.

What can I do?

Spread the word: Many survivors of human trafficking are not aware that criminal record relief may be available to them. If you or someone you know might benefit from this information, help get the word out.

Learn more: See how your state is doing here. Connect with HTI Labs if you’d like to learn more.