Commercial sex refers to any sexual act conducted in exchange for something of value, such as money or shelter. The industry is always evolving. Much of the advertising, communication, and solicitation occurs online and is becoming increasingly decentralized across countless websites, message boards, social media sites, and communication platforms. Sex trafficking is the hidden element of the larger commercial sex industry that involves a lack of consent. This is why not all commercial sex is considered trafficking, but all minors in the commercial sex industry are definitionally trafficking victims (they are under the age of consent). Anyone involved in the recruiting, harboring, transporting, providing, patronizing, soliciting, advertising, or obtaining of an individual through force, fraud, or coercion for the purpose of commercial sexual exploitation is a trafficker; if that individual is a minor, then no force, fraud, or coercion is necessary. This means that anyone posting an online ad for a minor to be sold for sex is a trafficker. Anyone recruiting an adult for prostitution by telling them that the job is for a waitress is a trafficker.

Segments of the Commercial Sex Industry

There are several different segments within the commercial sex industry. These are defined based on the perspective of the sex buyer and how they initiate contact and receive sexual services. A sex provider can be involved in multiple industry segments at the same time or throughout different points in their career. It’s important to note that trafficking looks different in each of these segments. These segments tend to be fluid, meaning traffickers / networks can change their business models in response to disruption efforts.

For example, when Craigslist took down commercial sex ads in 2010, online commercial sex ads moved to Backpage. When credit card companies stopped processing transactions for Backpage, the website began accepting advance cash payments, pre-payments, bitcoin, and other forms of payment. When Backpage was shutdown and subsequent legislation passed, online commercial sex ads move to a more decentralized set of largely offshore websites. More recently during the covid-19 pandemic, we saw that the financial duress attending the crisis has brought many first-time entrants to the industry, which has been experiencing a major shift in venue from massage parlors & hotels to online web cam activity.

The industry is in constant flux.

Note: As we dissect these segments below, terminology like sex provider or pimp or manager rather than trafficking victim or trafficker will be used. This is not intended to imply agency, nor does it exclude coercive or exploitative conditions. Rather, it is intended to encompass the full continuum of conditions found in the sex trade. Moreover, the use of the term does not seek to discount that pimps & traffickers often exercise significant control over the lives of sex providers, including posting their ads and transporting them.

In this segment, buyers solicit an escort advertised online or elsewhere. While the provider is generally the point of contact for buyers, logistics may be coordinated via an agency or third-party call center. Much of the commercial sex activity that takes place today in the United States is in this segment.

100% of respondents to a recent HTI Labs survey stated that they advertise primarily online. When asked if they write their own ads, responses varied; many identified third-party services, managers, pimps, and boyfriends as the person who wrote their ads.

Providers in this segment can also be represented by a pimp, where this relationship can range from being strictly a business relationship to an intimate partner relationship. What ties this segment together is the fact that sex buyers solicit specific escorts advertised and then arrange to meet them at a hotel or private residence of either the provider or agency’s choosing or the buyer’s choosing.

Trafficking in this segment can range from a single trafficker (often an intimate partner) to coordinated networks of traffickers affiliated with organized crime.

In this segment, sex buyers can go to a public outdoor space to solicit sex (example venues include street contact, cars, and truck stops). Outdoor solicitation is often associated with a higher risk of experiencing violence & exploitation. It is associated with violence, drugs, and survival sex. Due to the dangers involved, there is a high level of pimping in this segment as a means of “protection” — think of a provider not wanting to stand on a street corner alone.

Historically, government policy has focused on rooting out this segment, or at least removing it from public view. This has pushed much of it into indoor spaces, like brothels, which means that there are a lot of vulnerable people who have transitioned indoors, where their activities are more hidden. Today’s commercial sex industry is a combination of this phenomenon along with the rise of online ads, which together result in trafficking being less visible.

It’s common for traffickers in this segment to use the tactic of offering drugs, housing, or safety as a way to coerce providers to work involuntarily. They also tend to operate more independently rather than in networks with other traffickers.

In this segment, both solicitation and delivery of services are purely online or remote — there is no in-person interaction between sex buyer and sex provider. Services include picture/video sales and subscriptions as well as phone sex. The venue can be anywhere, although it’s usually out of a person’s home. In some cases, an agency of cam girls will all work out of the same location. This segment serves as the “easy” way to enter the industry, particularly in times of financial stress, and is therefore continuing to gain momentum in today’s commercial sex market.

Trafficking occurs in this segment when services are advertised and provided without the consent of the person being depicted. Additionally, traffickers often target and recruit young individuals who enter into this segment, leading to exploitation and third-party control.

Illicit massage parlors often operate under the facade of a legal business, where sex buyers can walk in or call in advance to set up an appointment. Similar to some in-call escort agencies, women are moved from one massage parlor to another to keep things “fresh.” However, unlike with in-call agencies, buyers know they’re negotiating with the business and online advertisements are more generally advertising the spa or massage parlor. Although they appear to be single storefronts, the majority of the businesses in this segment are part of a larger network, with 1-3 people owning several businesses.

Illicit massages/spa services are a prominent proportion of the market overall. Across jurisdictions, this industry segment is understood to represent a significant number of brick and mortar establishments, sex providers, and economic impact. For example, according to one research paper, illicit massage parlors in Houston yield $107 million per year.

In this segment, businesses are often connected to larger operators that help recruit women in their home country or immigrants with limited English searching for work in the U.S. Owners may leverage an individual’s immigration status as something to hold over their head. Business owners may also tie housing to employment, with sex providers residing in the place of business, as a means of making the option of leaving seem impossible.

Brothels can be understood as residential venues (e.g. a house or apartment) where commercial sex is known to be provided on a regular basis. Unless it is a legalized brothel, like in some counties in Nevada, it often operates through word of mouth advertising, which makes it exceptionally difficult to detect. This is a major problem, because residential neighborhood brothels tend to involve inter-familial or intimate partner trafficking, which has the highest percentage of minor victims. This segment represents a relatively small proportion of the market overall, and typically involves sex providers from the same ethnic/language group, often catering to sex buyers from the same minority population.

In the case of formalized brothels, traffickers may be part of larger, coordinated networks. Informal residential brothels, on the other hand, often involve inter-familial or intimate partner trafficking of minors.

The final segment consists of known legal businesses where buyers can go to meet sex providers. These include strip clubs, cantina bars, and casinos. The sex acts happen either behind the scenes at the legal location or elsewhere after contact is made. These enterprises may be entirely run by an organized criminal network, or they may be stand-alone businesses. This segment represents a relatively small portion of the industry overall, with some overlap occurring between the escort segment more broadly.

Trafficking in this segment may occur similarly as it does in the escort and outdoor solicitation portions of the industry, with the addendum that traffickers will make use of the legitimate business venues to connect with clients. For example, a trafficker can have one of his girls work at a strip club to meet clients and sell sex as private dances in the back room. The owners of the legal business may be actively engaged in it, unaware of it altogether, or just turning a blind eye. It’s important to note that it’s not just solicitation that will often occur at these venues, but it’s often where a lot of recruitment happens. For example, a stripper working at a club may be induced by the club owner to start performing escort work as part of her position.

The Challenge of Identification

While not all commercial sex activity constitutes trafficking, trafficking is a hidden subset embedded into the industry as victims are advertised online alongside it. But a key element to understanding this issue is that it is known that most trafficking is rarely formally reported. Trafficking research has only been able to rely on known, reported instances that come from the criminal justice system, service providers, or surveys & interviews, which only capture an extremely limited portion of overall trafficking.

So while it is known that trafficking is deeply embedded within the commercial sex industry, the anti-trafficking community as a whole struggles to quantify it. Additionally, because it’s rarely reported, as a community, it is collectively being missed.

The fact is that it can be extremely complex to determine if someone is a trafficking victim or not, and segment and network structure cannot be use alone to identify it. While there are obvious things to look for like, “is this person a minor?”, for adults you need to look at whether they entered the industry as a minor, whether they have or had a facilitator and if that facilitator lied to or misled them, or forced or coerced them, and also whether a client has ever forced or coerced them into something. No matter the typology, individual vulnerabilities and characteristics should also be evaluated. 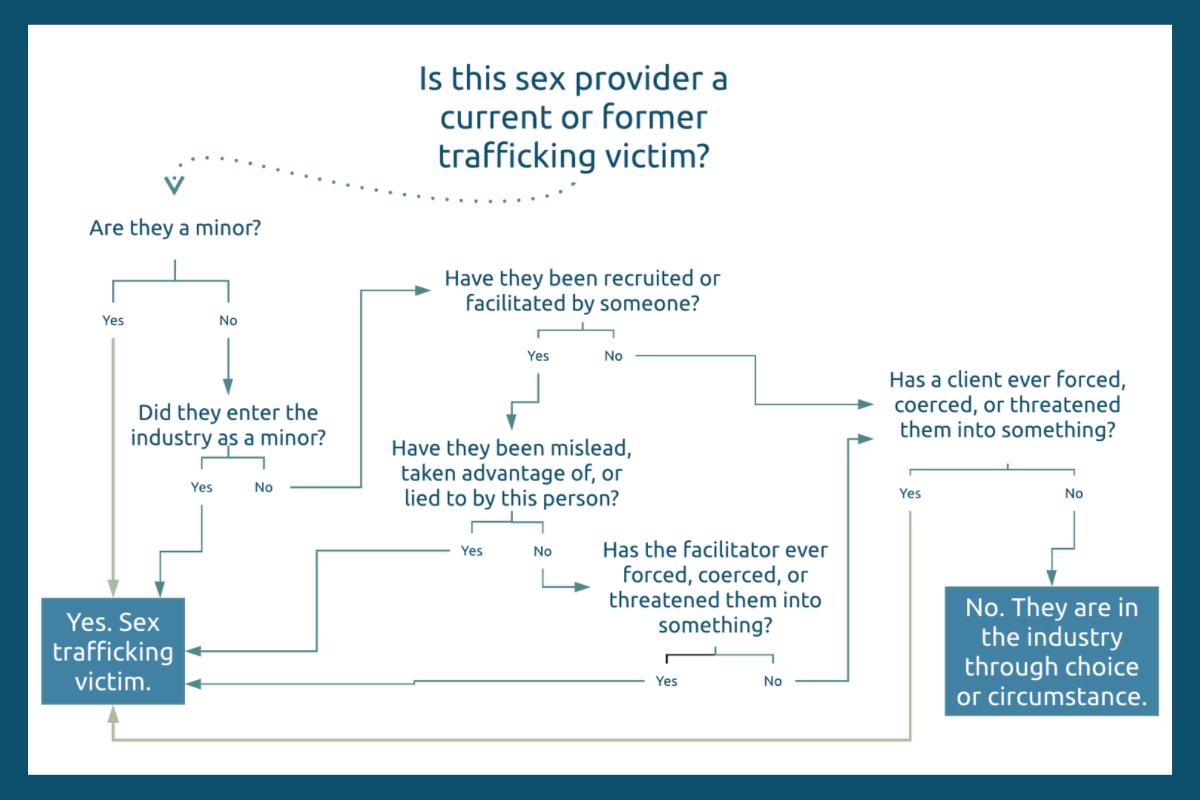 This makes it incredibly complex to label a sex provider as either a trafficking victim or not — at what point in time are you talking about? And does the context of their past involvement in the industry matter?

This fluidity means it is also crucial to identify and track traffickers over time via network analysis, because if they were a trafficker in one situation, then other sex providers connected to them now are at a higher risk.