The History of PAVE

Identifying situation of human trafficking is a major challenge, and changing a broken system can feel impossible. However, both are critical in order for survivors to get access to the help they deserve.

Back in 2016, the Nebraska Human Trafficking Task Force sought to better identify and respond to trafficking as a system. The effort was undertaken by the NHTTF screening subcommittee, which was chaired by our CEO, Crysta Price, and made up of multiple services providers, government agencies, survivors, and anti-trafficking coordinators across the state of Nebraska.

The screening committee set out to discover the services available to trafficking victims as well as the then current referral network linking service providers and assisting victims.

Listening sessions conducted by HTI Labs in 2017 of 26 Omaha-area service providers aimed at understanding the system for providing services to victims of trafficking shed light on a less than ideal system. The gaps seemed more like black holes and a less than ideal system with the need for effective trafficking identification and network coordination & collaboration was revealed.

The need for effective trafficking identification

Nearly every agency lacked the confidence that they had the ability to identify victims of trafficking accurately, relying almost exclusively on victim-survivor self-disclosure.

“I think it is really based on the relationship you have with them. They are not going to just walk right in and right away say I am a victim and I want out. As we know it is a slow, gradual process of getting to know them and building trust with you.”

Providers from 16 organizations explicitly noted the need for more information about what services are available for survivors while nearly every focus group mentioned difficulty referring for services. They lacked the tools to know who does what and what resources are available.

“A barrier to providing a continuity of care is a lack of a centralized resource listing specific to the needs of survivors.”

Informed with these findings, the screening committee set about to develop a software tool that would facilitate a graduated screening process where all roads lead to service. This tool eventually became known as PAVE. 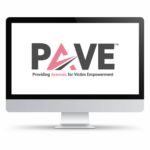 Such a systematic process for identifying and responding to situations of trafficking collaboratively — across organizations, industries, and communities — is a long-standing goal of many working on social and criminal issues. It’s never been done because information sharing has been considered too hard, and it is difficult to figure out the context needed to automatically provide next steps.

It took 3 years to innovate our way through this problem, but we did so in a way that actually increases confidentiality.

Near the end of PAVE’s development, we worked with the National Network to End Domestic Violence (NNEDV) Safety Net Project, which provides advice on the use of technology for victim service providers. They stated that PAVE is the only software they’ve ever endorsed, referring to it as “our guidelines in software form.”

For Human Trafficking Awareness Month (January) 2020, we announced the launch of the final product, PAVE. The interactive platform helps identify victims and supports appropriate response, equips users with the tools necessary to recognize situations of trafficking and to know what next steps should be, allows for effective referral-marking and ongoing provision of services in a protected virtual environment, and facilitates mandatory reports to child welfare and law enforcement.

By September 2020, Nebraska’s entire state child welfare system was fully trained and collaboratively screening for trafficking on PAVE, and by the end of 2021, PAVE had been implemented in three states.

Now, we are continuing to implement PAVE nationally and planning to expand our efforts to capture incidents of domestic violence and sexual assault.